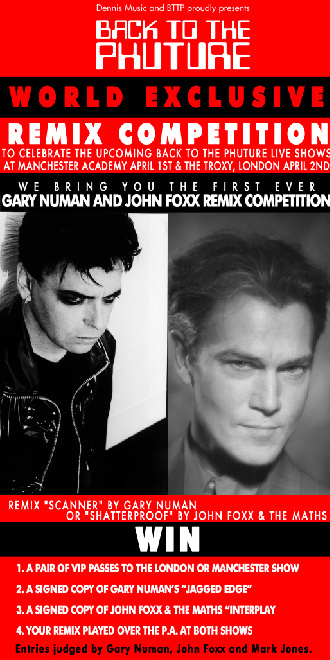 www.backtothephuture.net/remix-competition
To celebrate the upcoming Back To The Phuture shows at the Manchester Academy April 1st and The Troxy in London April 2nd, a Gary Numan And John Foxx Remix Competition is being held. This is the first time in their prolific careers that they have been willing to share the creative side of making their music with their fans. The competition involves fans making the best remix of either 'Scanner' by Gary Numan or 'Shatterproof' by John Foxx & The Maths, for the chance to win a pair of VIP passes to a Back To The Phuture show, a signed copy of the latest Gary Numan album 'Jagged Edge' and John Foxx album 'Interplay', and have their remix played over the P.A. at both shows. Entries will be judged personally by Gary Numan and John Foxx.
The details for the competition are found on the  Gary Numan Facebook page here (http://www.facebook.com/GaryNumanOfficial?v=app_10442206389), the stems to make the 'Scanner' remix are found here (http://soundcloud.com/bttp/sets/gary-numan-scanner-stems) and the stems to make the 'Shatterproof' remix are found here (http://soundcloud.com/bttp/sets/john-foxx-and-the-maths-shatterproof-stems). 'Scanner' remixes are uploaded to this SoundCloud page (http://soundcloud.com/groups/bttp-gary-numan-remix-competition) and 'Shatterproof' remixes are uploaded to this SoundCloud page (http://soundcloud.com/groups/bttp-john-foxx-remix-competition/tracks).

The competition deadline is 18/03/11 and tickets to the Back To The Phuture shows can be bought here: http://www.crowdsurge.com/backtothephuture/.
Autor: jacyk o 21:30